skip to main | skip to sidebar

Bama's a serious player - SI.com
"John Parker Wilson couldn't help himself. After getting driven into the ground by Jake Bequette, fellow Arkansas defensive end Damario Ambrose felt the need to come over and get in the quarterback's face late in the third quarter of Alabama's 49-14 win over Arkansas. Wilson smiled, put his arm around Ambrose like an old friend and pointed at the scoreboard as if it was picturesque sunset he couldn't miss. "Look at that," he yelled. "Just look at that." 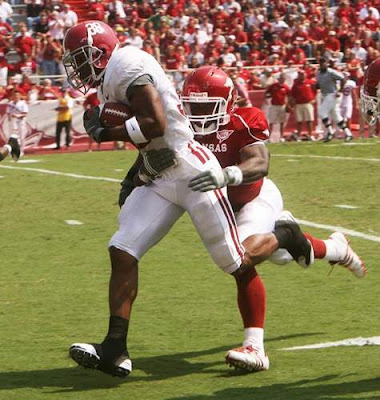 
Listening to the pregame on the way to watch the game with my Dad in Huntsville:

Tide ready to prove they're for real in SEC opener

Is Alabama for Real? Arkansas hosts No. 9 Tide

LITTLE ROCK, Ark. (AP)—For the fifth straight season, Alabama is 3-0—and nobody needs to tell the Crimson Tide how little that can mean.

“We are not disappointed in where we are but we are not where we can be,” coach Nick Saban said. “It is like an iceberg when you can only see a little at the top and there is a lot underneath the water. We just have to try and keep uncovering more and more of it and get more guys playing winning football.”

Saban was hired to bring championship football back to Alabama—and fans want more than just September victories. Last year Alabama started 3-0 and finished 7-6. In 2006, a 3-0 start became a 6-7 season and the end of Mike Shula’s coaching tenure.

There’s a sense that this year is different. Alabama is ranked No. 9, its first AP top 10 appearance since the end of the 2005 season. The Crimson Tide routed Clemson 34-10 in the opener. More >
Posted by Sharp at 7:36 AM No comments:

Posted by Mike Wilhelm at 6:38 PM No comments:

I'm a little behind here. I've been having so much fun living I haven't had time to write about it. That is not to say that when I do have time to write I am not having fun.

Eli's call of the Tide versus Clemson

From the Nick Saban Show
Posted by Mike Wilhelm at 5:13 AM No comments:

In his first college game, Southwestern graduate Mark Ingram led Alabama in rushing in the Crimson Tide's 34-10 win over No. 9 Clemson on Saturday night. Ingram, a true freshman, finished the game with 96 yards on 17 carries. On the Crimson Tide's first possession, Ingram gained three yards to give Alabama a first down on a third-and-1. In the third quarter, Ingram ran in a two-point conversion. Ingram also caught two passes for five yards.
Posted by Mike Wilhelm at 8:45 AM 1 comment: