skip to main | skip to sidebar

Recruiting class? What recruiting class? Best in the nation? Alabama head coach Nick Saban sought to temper the fervor surrounding players he hasn’t coached a day during his visit to Dothan on Thursday night. “Well, I don’t think you can put a lot of expectations on our young players,” the coach said moments before he met with several hundred Crimson Tide fans at the Dothan Convention Center. “We hope that some of these guys can contribute. We certainly need for some guys to contribute relative to the depth on our team.” College football fans saw Saban land what was widely regarded as the top-rated class in the nation on National Signing Day. But the coach cautioned that — talented as the freshmen are — they are still freshmen. “I think one of the things that kills young players quicker than anything is the high expectations that some people have for them — and then their frustration when they don’t feel like they meet those expectations,” Saban said.

In the tradition of the wave and tear-away jerseys, there's a new fad sweeping college football. But unlike those short-lived phenomenons, this latest trend has legs -- specifically, in the case of Alabama, 156,400 legs. An estimated 78,200 Crimson Tide fans showed up at Bryant-Denny Stadium last Saturday for the most anticipated controlled scrimmage of the year. Officially, it was the Alabama A-Day game, but still, to borrow a line from Allen Iverson, one of the great philosophers of our time, "We're talkin' 'bout practice." That number would be hard to imagine if it didn't come just one year after Alabama crammed more than 92,000 into the stadium for last year's A-Day, or one week before Nebraska took the spring fling concept to a new level.

Serious cases of spring fever have been identified elsewhere. More than 60,000 watched Florida run through a dress rehearsal that was televised last weekend by ESPN, while 78,200 turned out at Alabama a year after the Crimson Tide's scrimmage was witnessed by 92,138, the largest ever for a spring game anywhere. Besides getting a jump on tailgating, what do some fans really get out of these flimsy football exhibitions? Perhaps bragging rights. Take Ohio State, where there appears to be some discrepancy over the actual size of the crowd Saturday, as if it should matter in April. The school announced 76,346, but the Columbus Dispatch reported that the figure "appeared about 15,000 or 20,000 high." Out of vanity or some misplaced insecurity, could it be that the Buckeyes actually padded their attendance figures for a practice game? Has it come to that? Unlike pollen, spring football at some schools is nothing to sneeze at.

Alabama coach Nick Saban took a moment immediately following the Crimson Tide's A-Day game to reflect on the February signees who were among the 78,200 fans watching the Crimson's 24-14 win over the White team. "One of the things that is probably most evident is the opportunity that some of the young people might have who were out there watching today to come here and get an opportunity to play early," he said. If there's one thing Saban has remained consistent about, it's the playing time available to the incoming freshmen. And Alabama's biggest question marks -- at strong safety, right tackle, linebacker and wide receiver -- remain unanswered after 15 spring practices. "From a talent standpoint, you guys can make your own assessment," Saban said after praising his team's improvement over the spring. "And that's something we have to continue to build because you need talented players. We have some very good players but we certainly need more of them to be a dominant team in the SEC, there's no doubt about that."

The last time Alabama beat Auburn in football -- Nov. 17, 2001 -- the average price for a gallon of gas was $1.20. And you thought Alabama fans were the only ones feeling the pinch over these many years. But in many respects, it almost feels like Auburn fans continue to have to justify one of the most remarkable feats in the school's storied football history. In some respects, they have allowed Alabama fans to put an imaginary asterisk by this six-game streak. Why do Auburn fans often find themselves having to defend the streak around the water cooler? It's an illegitimate streak, some Tide fans claim, because of NCAA probation and multiple coaching changes. The rest of the reasons, real or imagined, roll off the tongues of Tide fans with ease.

One thing, more than any other, differentiates the modern 21st century world from everything that has gone before. That is the speed with which information – particularly raw data – can be delivered and disseminated. Almost as quickly as a number – a super-delegate count, or an interest rate – can be generated, it is available to almost anyone in the world who cares to access it. Numbers can be powerful things, too – even scary things.

Coming soon to a high school near you: someone other than Nick Saban. The University of Alabama's head football coach won't be visiting high schools to evaluate recruits anytime soon because of a new NCAA rule that prohibits head coaches from making such on-site visits during the spring evaluation period. Southeastern Conference coaches voted in favor of the rule, which was passed at the NCAA's convention in January. The new rule went into effect with the start of the spring evaluation period on Tuesday. The evaluation period concludes at the end of May. 'Now we'll have to do that in a little bit different way,' Saban said Thursday on a teleconference with league coaches. 'I'm going to spend a little more time trying to evaluate from afar looking at film.'

Posted by Mike Wilhelm at 8:44 AM No comments:

Here's a look back at what was arguably the best catch in college football history.

A Clip from A-Day

This time last week I was enjoying the A-Day game with my sons at Bryant-Denny Stadium. Here is a clip of how things looked from where we sat. Pardon the rather poor filming.

"Although her speech was heavy with the serious issues revolving around warfare and statecraft, Rice did take a little time to teach lessons about her native state to an audience filled with military personnel from across the country and world.

"When you address people here in Alabama, you say y'all. But, the plural of y'all is not y'alls. A lot of people just say, all y'all," Rice said as the crowd laughed. "There is also nothing called unsweetened tea. It just doesn't exist.

"But, if you really want to understand Alabama, become a part of us, you really need only three words: Roll Tide Roll," Rice said."

Check out what happens at 3:47
Posted by Mike Wilhelm at 6:58 PM No comments:

A few photos from A-Day 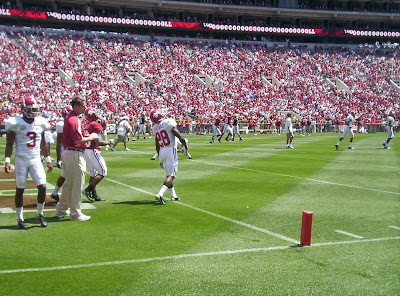 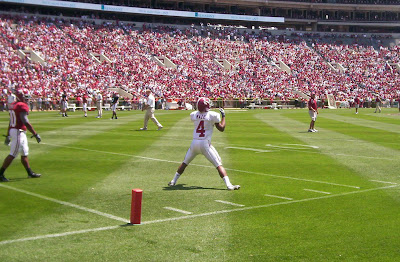 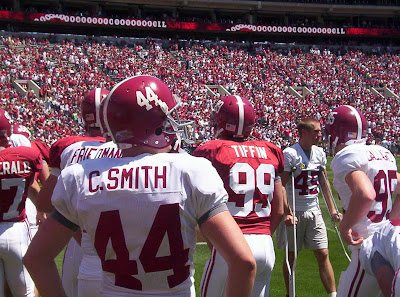 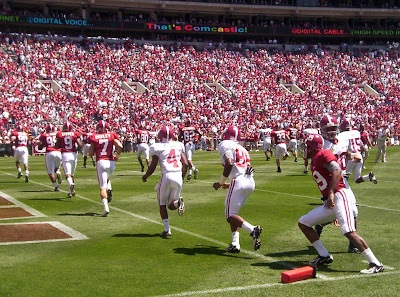 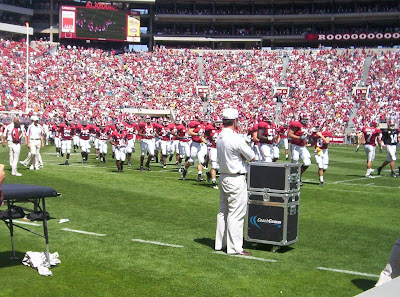 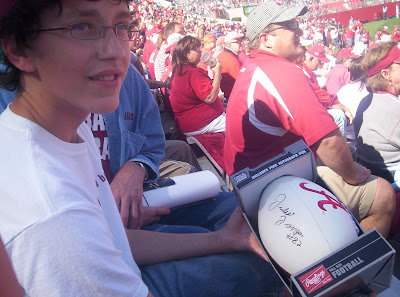 Saturday the boys and I woke up early and got ready to go to the A-Day game. We met my friend Tee Drake at the Cracker Barrel at Exit 310 on I-65 at 8:30. It was a good trip down and we were able to park beside the baseball stadium. It was a cool and breezy morning but with the sunny skies, it made for a perfect day to watch the game. We walked down Bryant Drive toward Bryant-Denny Stadium and ate at Rama Jama’s. By the time we finished eating it was probably around 11 a.m., which was an hour before the gates opened. A pretty good line had already formed and there were more people who arrived early this year than last year. We also met Tee’s friend Ralph there. While they saved our places in line, Matt and I went and bought some bottled water. When the gates opened, I had a bag so the inspectors had to look at it and everyone else in the group got out ahead of me. They got our seats but I was lost from the group for awhile. It was like a stampede of red elephants on the way in. I finally made contact with Ralph and Tee and found our seats.

Matt and I walked down to the field level to watch the players warm up and take some pictures. I also let David and Joe walk around a little before the game began. The game itself was entertaining. The offense did better than they had performed in previous scrimmages. They threw the ball more than in the past. There were a few big plays. The highlight for David was obtaining autographs from Athletic Director Mal Moore and star recruit Julio Jones.

David had to be very resourceful to get Julio’s autograph. He brought an Alabama football that I had given him. He found out where Julio was sitting behind us. Then he realized that this pen was not working so he asked me what he could do. I suggested that he find another kid who had a pen and for them to both go up there together. David did that but he wasn’t done with the obstacles. David spoke to a police officer and some fans who told him some inside information. They told him that if he approached from a certain direction the recruits’ girlfriends would not let them through. They provided him with an alternate route, which he took. When he got up to Julio, Julio’s girlfriend tried to stop him. She told him not to bother them as they were trying to enjoy the game. David went ahead anyway and said to Julio, “Would you please autograph my football?” Julio didn’t say anything but he very kindly signed the ball for David, though. We all had quite a bit of fun and enjoyed ourselves. We got home around 6:30.
Posted by Mike Wilhelm at 9:43 PM 5 comments:

It was the kind of question that's been known, on occasion, to light Nick Saban's fuse. Someone - OK, it was me - asked him late Saturday afternoon to compare his Alabama football team's status after this spring game to where the team stood after A-Day 2007. - More

Saban: "We've got enough show dogs around here," he said. "We're looking for some hunting dogs."
Posted by Sharp at 4:37 PM 1 comment:

Tide offense not in panic mode (yet)

"We kind of got after them this Saturday," Crimson Tide cornerback Kareem Jackson said, "and they got after us today."

How bad was it Saturday? Scrimmages often leave a gray area as to which side of the football enjoyed more success, but this wasn't like that. Statistics anointed a clear winner.